According to Thibaud Vezirian who is a respected football journalist claims Mkhitaryan to Arsenal is almost a “done deal.”

The Almeria Journalist took to Twitter to claim he has heard that Mkhitaryan, an Armenia international, has agreed a switch to Arsenal.

He tweeted an Armenian flag and wrote: “The transfer of @HenrikhMkh to @Arsenal, it’s done! Alexis Sanchez go to @ManUtd.” 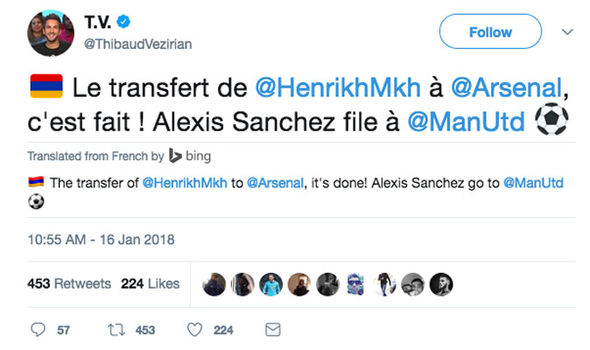 Manchester United are believed to be leading the race in signing Sanchez after fellow rivals dropped out in the race due to Sanchez’s weekly wage demand and the Gunners valuation of £35million.

However, reports suggest United are understood to have offered him £300,000 a week – or £15m a year. Those sort of figures ensured City went cold on a player for whom they bid £60m last summer.