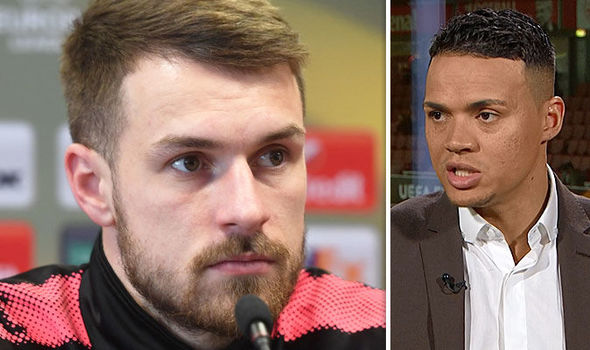 According to BT Sport pundit Jermaine Jenas, he reveals Arsenal should act fast in extending Aaron Ramsey contract at Arsenal.

Ramsey is out of contract at Arsenal in 2019 and talks have not begun over an extension.

The Wales international has been in and out of the side this season due to injury problems.

The former Tottenham man says there are not many better than Ramsey when he is fit and firing and that is why Arsenal must keep him.

“I feel for him a little bit, Aaron Ramsey,” Jenas said.

“He’s one of those players that falls into the bracket that, almost close to Jack Wilshere, in terms of the injuries have really held him back.

“Aaron Ramsey is one of those players, when he’s at his best and he’s fit, he’s unplayable at times. The way he goes box to box, those late runs that he makes, he’s good at finishing.

“So it’s important he maintains that sort of run of games in the team this season.

“It’s not as strong as it needs to be in there and he’s one of the players who’s done so much in his Arsenal career, could have been so much more don’t get me wrong, but he’s a top, top player.”