Arsene Wenger is determined to sign a top striker this summer after a somewhat disappointing 2015/2016 season where the club failed to peep Leicester City to the Premier league title.

Statistics such as those clearly shown at Sporticos proves Wenger’s search for a world class striker to lead the attack next season is justified and Napoli hitman Gonzalo Higuain is one of his top targets.

The Argentine striker has proven to be one of the best strikers in the Italian Serie A and the whole of Europe in general with his stats clearly justifying such claims. 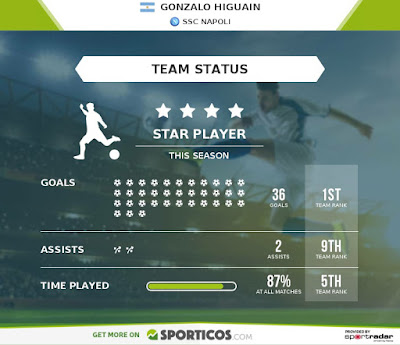 Speculations linking the Argentine to Arsenal has been rife in the last couple of days and it appears the club has taken a huge step towards signing the striker.

According to Football Italia, Arsenal have proposed a meeting with Napoli on Thursday to discuss the possibility of signing Higuain.

Napoli’s president Aurelio De Laurentiis and sporting director Cristiano Giuntoli and Arsene Wenger are expected to be in the meeting. It is believed Arsenal would present a formal offer for the striker at the meeting.

Italian Journalist Emanuele Giulianelli also had his say on the report. The Journalist, via the Daily Star, claimed the Gunners have already agreed terms with Higuain’s representative and the striker would be offered a five year contract worth €9m per year.

Other media outlets are claiming Arsenal are preparing a €60m plus Olivier Giroud bid for Higuain but Giulianelli claims the Serie A club are not interested in a player plus cash bid. The striker has a €94m release clause and Giulianelli believes the Gunners can get the striker for a €70m + €8m add ons bid for the striker.

He tweeted: “Higuain’s agent (his brother) has already agreed with Arsenal a wage of €9m for 5 yrs.”

“Bid to Napoli not officially done yet but expected.”

Higuain scored 36 goals in 35 league games for Napoli last season and will be a boost for the team should he arrive at the Emirates this summer.